US$1 Trillion Green Bonds by the Summer?

Global green bond issuance reached US$263 billion in 2019, a 40% increase from 2018 and a far cry from the US$1.8 billion lows of 2011, according to data disclosed to NordSIP by Danske Bank. Total green bond borrowing during the second decade of the 2000s reached US$825 billion.

Looking ahead on a prosperous 2020

According to Danske Bank, the market is expected to continue to experience buoyant growth with a another US$350 billion of green bond expected to be issued in 2020 – a growth of 33% from 2019, leading to a total green bond issuance worth US$1 trillion after the summer of 2020.

With the EU's Sustainable Finance Taxonomy in place by early Q2 2020, issuers may start to adopt the EU Green Bond Standard, giving the European market, and the rest of the world by association, the benefit of a clear definition of what is considered as “green”.

According to Lars Mac Key, Head of DCM Sustainable Bonds in Danske Bank “these clear definitions will encourage new issuers and investors to enter the green bond market.” The implementation of the green bond standard might lead to some delayed or postponed issuance as borrowers may want to update their green bond framework, “but overall, we see these definitions as a positive for 2020 issuance,” Mac Key explains.

Corporate Green Bond was by far the dominant sector for green bonds in 2019. 218 unique corporates issued US$97.7 billion of green bonds, corresponding to an 108% increase from 2018 and claiming almost 40% of the total volume of green bonds issued in 2019.

Corporates are one of the sectors that will gain the most from clear thresholds and definitions of what is defined as green in the EU Sustainable Finance Taxonomy, according to Mac Key. Further growth from this sector is expected in 2020. A recent investor survey by European Investor sponsored by Danske Bank revealed that corporate bonds were the most sought after by leading investors.

Financial Hold Still on the Fence

Issuance from Financial institutions has been rather stable in 2018 and 2019, increasing only from US$52 billion to US$59 billion over the last year. The main reason for this lack of growth is that many of the financial green bond issuers still have limited possibilities, most of the 116 issuers active in 2019 only issued one green bond.

Danske Bank anticipates an increase in green bond issuance from European financial institutions in 2020, following the adoption of the EU Taxonomy. The expectation is motivated by the taxonomy’s adoption of the same “low carbon building” standard definition as used by the Climate Bonds Initiative, according to which buildings with the 15% lowest carbon intensity in a dedicated area can be used for green bond financing. Given present building regulations and standards in the EU the adoption of this threshold means that, more or less, all new buildings will qualify for inclusion in new green bonds.

More than 30 issuers brought almost US$40 billion to the market, equivalent to 15% of the green bond borrowing. Kreditanstalt für Wiederaufbau (KFW)’s US$9 billion, the European Investment Bank (EIB)’s US$3.5 billion, the European Bank for Reconstruction and Development’s (EBRD) US$3.4 billion and the World Bank’s (IBRD) US$3.3 billion all made it to the top 10 largest issuers of 2019.

The green bond market was dominated by Supranationals and Agencies until 2013.  They are consistent and committed to the green bond market. For example, KFW announced it expects to issue at least the same amount in 2020 as it borrowed in 2019.

Nine individual sovereigns borrowed US$26 billion through green bonds in 2019, corresponding to 10% of all green bond issuance last year. Although they are still rare, sovereigns tend to come into the market with larger tickets. Green bonds from the Netherlands, Ireland and France where all among the ten largest deals of 2019.

For 2020, Germany has announced its twin bond concept where they will issue green bonds mirroring normal bonds. Sweden has also announced it will issue dark green bonds in 2020. Still in Scandinavia, Denmark has also disclosed its intention to issue green bonds in the innovative format “Proof of Green”, which might revolutionise the green bond market for countries with low debt needs. We also hear whispers and rumours of plans by the likes of Italy, Spain, Egypt and Kenya to enter the market this year. The Netherlands, France and Chile have also committed to further issues in 2020.

*Supranationals are not included

EUR, breaking through EUR 100bn of issuance in one year 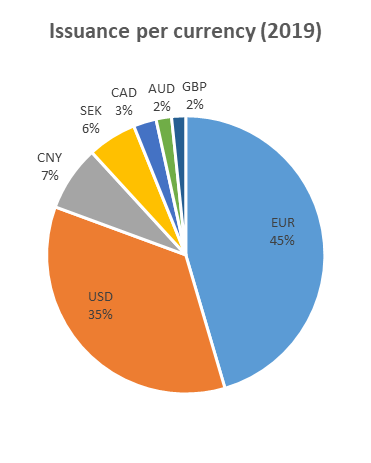 On the back of a strong fourth quarter, Euro broke through €100 billion of yearly green bond issuance for the first time and continues to be the major currency for green bonds, with 124 unique issuers, an increase with 45% from 2018.In Euro, some 3% of all bonds issued were green in 2019, for corporates alone this number is 9 per cent. The Largest issuer was the Netherlands with its EUR€6 billion inaugural green bond, closely followed by France €5.9 billion and KFW with €4bn.

Swedish Krona on a Roll

Swedish borrowers continued to be the Nordic driver, doubling green bond issuance in 2019 to SEK133 billion. Green bonds counted for 15% of all SEK fixed income funding in 2019, up from 10% in 2018. Kommuninvest, DNB Boligkreditt and Vasakronan were the top three SEK issuers of 2019.

2019 there were also saw some interesting green bonds in other Nordic currencies and by other Nordic issuers. KFW and Ferde issued two large tickets in NOK, while the EIB, the World Bank, also issued in DKK. Danske Bank, Kommunekredit, Nykredit and Ørsted all contributed with issuances in other currencies.

The top five lead managers in the 2019 green bond market were Crédit Agricole CIB, HSBC, BNP Paribas, BofA Securities and Citi. Of the Scandinavian banks, only SEB and Danske Bank made it to the top ten, coming in at number 7 and 9 out of 192, respectively. Danske Bank arranged green bonds for US$15.5 billion, with league credit of US$5.7 billion. SEB had a league credit of US$7 billion.

“We are extremely proud and happy to end up in the top 10 of global 2019 green bond arrangers,” Mac Key says. “It has truly been a joint effort across all areas in the bank, to engage with so many of our valued clients. We carry with us the trust our clients have shown us during the year, all the interesting dialogues, and we will continue to build on this for the new decade.”

Among the other Nordic Banks, Nordea came in at number 15, Swedbank at number 23 and Handelsbanken at number 42.

Danske Bank’s use of cookies and processing of personal data

We use data from our own cookies and from third-party cookies. We use cookies and process personal data for the purpose of remembering your settings, improving our services, measuring traffic, showing you relevant messages (including profiling) and tracking your use of our website. You can choose to accept our use of all cookies, our use of functional, statistical and marketing cookies or our use of necessary cookies only. Your consent covers the use of both cookies and the associated processing of personal data. To get more information, click use of cookies and processing of personal data. To read more about how to revoke your consent, click the cookie guidelines link at the bottom of our website.